This blog describes the effect that the COVID-19 pandemic had on farmers in Mozambique from March 2020 to September 2021. The analysis is based largely on the reflections of Resilience technicians who provide extension services to farmers throughout the Zambezi Valley in Mozambique.

Throughout the COVID-19 pandemic, the Government of Mozambique acted forcefully to contain the spread of the disease while simultaneously avoiding a very costly (and possibly unrealistic) lockdown. In March 2020, a state of emergency was announced. The government’s initial stance was to try to prevent the disease, followed by acceptance of both the existence of the virus and the need to envisage a ‘new normal’ combined with a slow opening of the economy. In 2021, stricter measures were initiated in response to the emergence of the Beta (South African) variant.

So far, the government managed to avoid a complete lockdown. As of September 2021, Mozambique has had 150,000 confirmed cases and almost 2,000 registered deaths. Nevertheless, the pandemic, combined with the mitigation measures, has likely exacted a heavy blow to the economy. 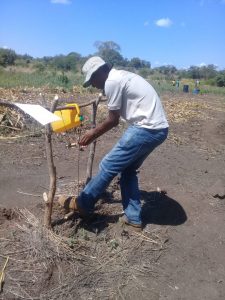 On top of the impact of the pandemic, farmers in Mozambique face climatic and production challenges. Despite these challenges, farmers actively engage in (irrigated) agricultural development, a process described in recent literature as ‘farmer-led irrigation development’ (FLID). FLID is widespread throughout Mozambique (and sub-Saharan Africa), and is characterised by farmers who take the lead in their own development, making use of opportunities of the market, technology, knowledge, financial and resource potential around them.

In Mozambique, there are typically two growing seasons: the rainy/hot season (November to April) and the cold/dry season (April to November). During the rainy season, farmers produce maize, beans and soya on plots ranging from 0.5 to 5 ha. During the dry season, farmers irrigate horticulture crops on plots ranging from 0.25 to 2 ha. Production is for the local market and home consumption. Farmers have access to, and apply, inputs such as improved seeds, fertiliser and pesticides. Fig2. The team entered into the field with special jackets calling attention for social distancing[/caption]

Resilience works directly with farmers to catalyse FLID through the APSAN-Vale project. In this project, we focus on facilitating the drivers behind development so that farmers remain actively in the lead, improving their own (irrigated and commercial) agriculture enterprise and taking ownership of the process and results. 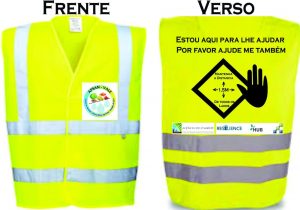 Fig2. The team entered into the field with special jackets calling attention for social distancing

Reflections on the impact of COVID-19 on farmers in Mozambique

Resilience staff based their reflections on the following questions:

a.       How were the farmers influenced by the virus itself?

b.       How were the farmers influenced by measures that the government introduced?

c.       How were the farmers influenced by indirect impacts of the pandemic?

d.       Were there other factors that influenced the farmers’ production system from March 2020 to September 2021?

Overall impact of COVID-19 on farmers in Mozambique

Although not completely limiting Mozambique’s smallholder farmers’ production cycles, the pandemic had impacts mostly felt on production and access to markets. The impact came from fear of the disease, government regulations, and other global impacts like access to inputs through limited transport and increased  prices.

The virus did not reach the rural areas where the APSAN-Vale project operates, and therefore did not have an impact on the health of the communities there. However, fear of the disease did influence mobility between rural and urban areas, because community members believed the disease came from the cities. The farmers did not welcome technicians, for fear that the technicians would bring the virus from the cities into their communities. At the same time, the community members avoided going to the city. In effect, the fear of COVID-19 had a negative impact on farmers’ production and marketing.

In addition, government regulations on mobility influenced farming systems. Two main factors were restrictions on crossing international borders, in particular the border with Zimbabwe, and a suspension of the train line between Tete and Beira, which impacted access to the market. Local rules on minimising the size of group gatherings also affected production.

Especially in March 2020, when there was a lot of uncertainty and fear about the virus, farmers did not trust technicians from the city coming into their communities. As a result, the technicians were not able to directly support and advise the farmers through monitoring rounds. APSAN-Vale did provide digital extension services through an app and SMS, but the pandemic showed how important field monitoring and personalised advice is for farmers. This had an impact during, for example, pest and diseases attacks, when technicians could not advise the farmers on the required pesticides, thereby decreasing production.

Farmers in Barué were limited in their access to inputs because Zimbabwe closed its border. Moatize and Nhamatanda farmers were not affected by border regulations. In Barué, however, there is typically a lot of travel to and from Zimbabwe, because of proximity to the border[1] and a common language, Shona. Many farmers buy their inputs in Zimbabwe. But crossing into Zimbabwe was challenging and at times impossible, because Zimbabwe closed its border or only allowed regulated crossing. In the Moatize district that neighbours Malawi, similar cross-border trade was normal, but unlike Barué, access to inputs from other markets was not constrained because there were no regulations restricting movement across the Malawi-Mozambique border.

Fewer inputs were also available on national markets because of Mozambique’s dependence on imports, which were reduced due to the closed borders. The increased transport prices at the same time increased the costs of the inputs available. As a result, farmers had decreased access to improved seeds and therefore planted their rainfed crops in smaller land areas.

Another reason why production areas were smaller than normal was because of the local leadership’s rules on aggregation of people. Local leaders only allowed three to four people to work together, limiting farmers’ ability to hire casual labour (from other areas) during land preparation, planting and harvesting. During the rainy season, in particular, fields were smaller than normal because they require more labour at a certain times in the production cycle. In response, farmers adopted ‘staggered’ practices (planting smaller areas in sequence spread over time) to reduce labour input. In addition, these practices  mitigated the risk of major crop losses as a result of irregular rainfall patterns.

A temporary positive development that mitigated the labour shortage somewhat was the presence of older children and youth in the communities because the Mozambican government suspended education establishments (from pre-school up to universities) at various times during the pandemic. As a result, certain farmers benefitted from children being available during the day to support agricultural and other activities, e.g. the reading of documents.

In addition, when technicians were eventually accepted in the communities, they were able to support government campaigns aimed at raising awareness of hygiene. For example, APSAN-Vale placed greater emphasis on using local hand-washing stations (tip-taps) and raising sanitation awareness, which will hopefully lead to long-term improved hygiene practices.

In general, farmers sell their produce through four channels: directly on the field through (informal) traders, to agribusinesses (e.g. maize to a local maize mill), in the urban markets to (informal) traders, and at fairs. The latter two channels, especially, were impacted by the pandemic, placing the farmers in weaker bargaining positions.

As well as being discouraged by government and local officials from travelling to the cities, farmers feared that if they went to the cities they would catch COVID-19 and bring it back to their communities. Therefore, the farmers did not go directly to the markets in the urban areas, leading to dependency on traders coming to their fields to buy their produce, thereby decreasing their access to market information. Traders who went directly to the farmers’ fields were aware of farmers’ dependency and reduced access to information, and so offered the farmers lower prices.

In addition, market fairs were postponed, because all social gatherings – such as meetings, conferences and religious services – were suspended. Normally at these fairs, farmers set a common price to sell their produce. The farmers received lower prices for their produce because items were primarily sold individually and on the field.

In addition, limitations on mobilisation and transport disadvantaged the Moatize farmers. In normal times, (informal) traders go from Beira to Tete to buy horticulture, typically travelling by train as it’s cheaper than by road. During the pandemic, the Mozambican government discouraged movement throughout the country and temporarily stopped train transport for people in the centre of the country. Therefore, fewer traders came to Tete.

While access to markets decreased the income of farmers, Mozambique’s economy suffered a downturn during the pandemic. Prior to the pandemic, growth forecasts for Mozambique for 2020 were as high as 6% (United Nations, 2020).[2] By the end of 2020, the gross domestic product (GDP) at market prices had decreased by 1.3% (INE 2021).[3] In 2019, the price of a box of tomatoes was 250MNZ, whilst in 2021 it was 100MNZ. Farmers are less inclined to sell their produce for such low prices, and because of inadequate post-harvest facilities, they cannot store their (horticulture) produce. In turn, this means they sell less.

The government also put two policies in place that could have been beneficial for the farmers but were not mentioned in the technicians’ reflections: (a) the cost of mobile money transactions was reduced to support transactions during the pandemic; and (b) a value added tax (VAT) exemption on sugar, cooking oil and soap was put in place until 2023 for families and firms. 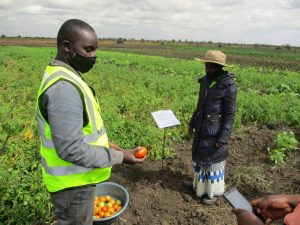 Farmers in the middle of Mozambique were affected by the COVID-19 pandemic because of fear of the disease, and as a result of national, regaional and local government regulations. In particular, decreased mobility and poorer access to inputs and output markets affected the production and income of the farmers. Farmers’ off-set markets were limited, as they were more local because of decreased access to transport. At the same time, this demonstrates the regional connectivity and dependence on regional and national markets of farmers who commonly are perceived as subsistence farmers. Nonetheless, the farmers continued production and were less affected than Mozambicans in urban areas.

[1] When farmers travel to Zimbabwe, they invariably say ‘I’m going over the mountain’, as the border is a long the mountain range.

This website uses cookies to improve your experience while you navigate through the website. Out of these cookies, the cookies that are categorized as necessary are stored on your browser as they are essential for the working of basic functionalities of the website. We also use third-party cookies that help us analyze and understand how you use this website. These cookies will be stored in your browser only with your consent. You also have the option to opt-out of these cookies. But opting out of some of these cookies may have an effect on your browsing experience.
Necessary Always Enabled
Necessary cookies are absolutely essential for the website to function properly. This category only includes cookies that ensures basic functionalities and security features of the website. These cookies do not store any personal information.
Non-necessary
Any cookies that may not be particularly necessary for the website to function and is used specifically to collect user personal data via analytics, ads, other embedded contents are termed as non-necessary cookies.
SAVE & ACCEPT
Change Location
To find awesome listings near you!